AARP Magazine - How to Exit a Timeshare

Jean Chatzky of AARP Magazine tells the story of a mother and daughter who try to get out of a timeshare. 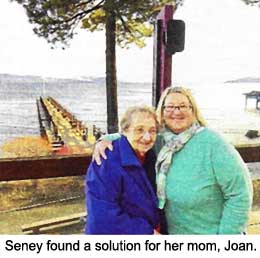 THE PROBLEM
More than 30 years ago, Kim Seney's parents bought a timeshare near Reno, Nevada. But they hadn't used it in years, and now Seney was helping her widowed mother, Joann Johnson, 85, unload it - and its $1,200 in annual fees.

But as Seney and many others have discovered, disposing of a timeshare and its associated obligations isn't easy. She failed in her attempts to sell it on eBay or donate it to charity. She then looked at using a timeshare exit company, but its $10,000 fee seemed high. Was there any alternative?

THE ADVICE
Your first move, experts agree, is to check with the resort itself. Ask specifically for the person who handles "deed-backs" or "surrenders" - which is when you return your property to the company, maybe for a fee of a few hundred dollars. Explain your situation in detail. "Almost all the major programs have some sort of deed-back program,” says Brian Rogers, who runs the 27-year-old Timeshare Users Group online. To qualify, you generally can't be behind on your dues and you can't have a loan balance. Smaller resorts and developers that don't have official deed-back programs may relent anyway. “In many cases, the squeaky wheel gets the grease,” says Rogers. Just don't get talked inot buying more points or "upgrading" before you're allowed to cancel. Be wary of any resort company that tries to talk you into buying more points or “upgrading” before it allows you to cancel. Hang up and move on to one of the following solutions.

1. Stop Paying.
Before you do this, take stock of your situation. If you took a loan to buy the property and you still have a balance, stopping payment will have an impact on your credit. “The creditor doesn't care that you bought a timeshare,” Rogers says. “You borrowed money and didn't pay it back.” But if you simply stop paying annual fees, a company may not report that to credit bureaus.

Often, stopping your fee payments is the push resorts need to allow you to surrender. Why? Accepting a surrender often costs them less than foreclosing on the property, explains Daniel Blinn, a Connecticut-based attorney who has handled timeshare cases. “The amount of money usually is not enough for the resort to bring suit. They typically will remarket the timeshare."

2. Resell it.
You'll get little or no money, except perhaps for a premium timeshare in a higher-end chain like Disney, Marriott or Hilton. But if you do find a buyer, you deed that person the property, who will then be responsible for the fees. Although you'll find listings on eBay and Craigslist, there are two major forums just for timeshares: tug2.com (the website for Timeshare Users Group) and redweek.com.

3. Use a company to help.
Be very, very careful here. The Better Business Bureau (BBB) reported in 2019 that “complaints against Missouri-based timeshare exit companies have exploded in recent years.” (Many sprouted in Missouri as an outgrowth of timeshare companies in the Branson resort area; more have popped up as timeshare owners cut back on spending during the pandemic.) Complaints revolved around hard-sell tactics, fear-mongering — no, your kids won't have to keep paying fees after you die — and cases that drag on for years. The biggest red flag, Rogers notes, is a requirement that asks you to pay upfront. “We would never, ever suggest the use of an exit company. Period,” says Rogers.

The only reason to even consider the exit company route is if you absolutely can't bear to deal with the timeshare company yourself, and you're willing to pay a lot — prices vary widely, but around $4,500 is common — for someone else to deal with it

THE OUTCOME
Exiting was surprisingly easy. Seney called the resort company, explained the situation and was told they'd take the timeshare back if she sent in her father's death certificate. The foreclosure process, which the company says it won't report to a credit bureau, should take less than six months. "I'm over the moon," Seney says. "I wish I'd discovered this two years ago".

Find out The Way to Cancel your Timeshare

Listen to our Podcasts

Get a Timeshare Attorney Evaluation to have your timeshare contract released permanently.

⇒ Can I Get Out of My Timeshare?
In today's current economic climate with many homeowners losing their home to foreclosure, short sale or simply "walking away" they are finding that they are burdened by their timeshare... [more]

⇒ The Future or Timeshares Today I'm going to discuss certain aspects of today's timeshare industry and the future of timeshares tomorrow... [more]

⇒ History of Timeshares The term "timeshare" also known as holiday home sharing, was originally coined in England in the early 1960s... [more]

⇒ Lawsuit Tries to Stifle Timeshare Attorney A company that helps people exit timeshares urged a Florida federal court Monday to release it from litigation alleging that it interferes with contracts... [more]

⇒ List of Timeshare Companies and Vacation Clubs A founding pioneer in the consumer protection field of timeshare relief, cancellation and exit... [more]

⇒ Timeshare Bandits How police brought down one shady timeshare operation. 2 years after Nancy bought the timeshare condo she wanted to get rid of it... [more]

⇒ Timeshare Resale Scams The timeshare industry has historically been plagued by resort developers who use high-pressure and deceptive sales tactics to close a timeshare sale... [more]

⇒ Trouble in Timeshare Paradise Learn how to avoid common and costly pitfalls. And find out why timeshare "resale" companies may be nothing more than scams... [more]